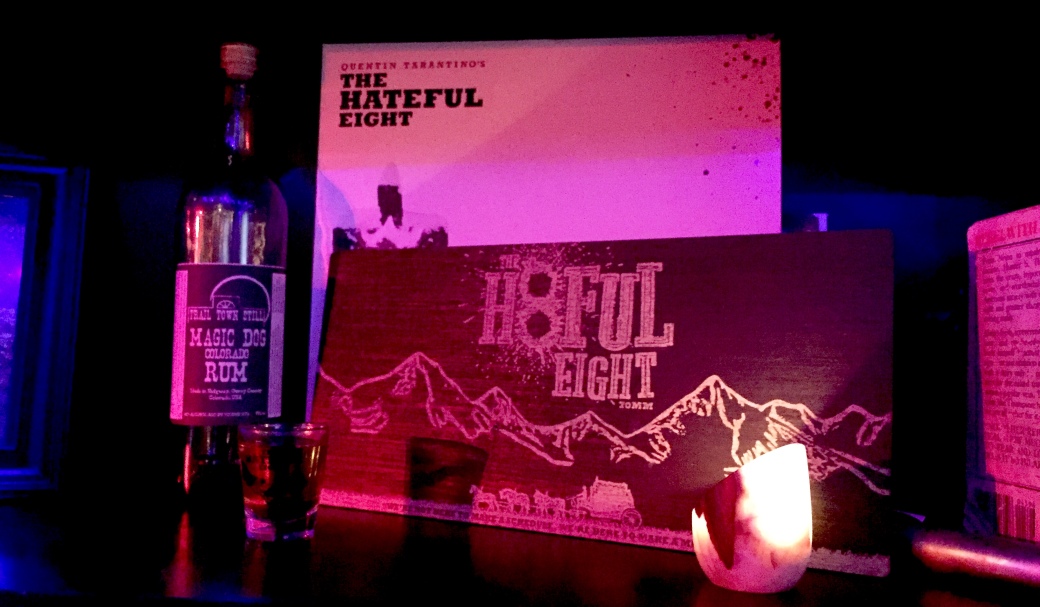 We were working at 10,000 feet, almost two miles above sea-level in the San Juan Mountains of Colorado. The feature was The Hateful Eight, the eighth film by Quentin Tarantino and all the regular players were there. Conditions on set were harsh. Oxygen and air pressure were scarce, and temperatures swung from -6 degrees Fahrenheit to almost 50 in a matter of hours. If the script called for snow, then we shot in snow from sunrise to sunset. But when the sun shone and there was not a flake in the sky, we shot inside the Haberdashery; our so-called, “cover-set” reserved for exterior sunshine instead of precipitation.

On those days that we worked inside the Haberdashery, the mud was abhorrent. What was frozen solid when we arrived at 5:00AM, would be a mush of soup on top of a slick layer of ice by noon. It was impossible to not track the sludge into the Haberdashery, and because of film continuity, it wasn’t even a possibility to allow that much mud all over the floor of a set where it’s supposed to be a blizzard outside. Therefore, we needed a floor covering crew, and our department (craft service) was responsible for the cleaning and maintenance of floors on set.

So Teddy (our department head) hired these two guys from Montrose, CO who worked the construction crew in pre-production named James Moody, and Matt Hewlett. James and Matt were hard workers with likable personalities who rolled out Ramboard on the floor for close-ups, and rolled it away for wide shots. Then at the end of every 14 hour day after the crew left, they stayed behind to mop and clean the floor for tomorrow. Matt was a genuine guy with a kind smile and an aura that glowed brightly. He could hold a conversation like a pro, never making you feel uncomfortable or awkward. I felt like I could tell him anything, and he wouldn’t judge, wouldn’t take it out of context. He was a real human being with a bright soul and a beautiful smile. I liked him and James right away and looked forward to seeing them on set every morning.

Several months passed and we eventually left the San Juan Mountains. Production on Hateful Eight ended in Colorado and went back to LA. I went home to my family in Denver, and Matt and James went back to life in Montrose. Which even though Montrose is in the same state as Denver, the two cities are 6 hours drive from each other, so I knew I probably wouldn’t see much of Matt and James in the future. Until they moved to Denver and applied to become Union stagehands with IATSE Local 7, the Union I’m a member of. The same union that sent me to Telluride where we all became friends in the first place. I was excited to hear that Matt and James had moved to Denver, because I missed them and looked forward to seeing them more often. But it was only a matter of weeks before we got the news about Matt’s cancer diagnosis, and realized that his time on Earth suddenly became short. It was a hard pill to swallow, and my heart has been broken ever since.

Matt passed away recently, but not first without a brave and gracious fight. When I heard of his diagnosis several months ago, I called him. I was amazed at how positive and brave he was acting with such news. I apologized for not knowing what to say, but let him know that I was thinking of him often. He said he was happy to consider me a friend, and thanked me for being honest. Cancer is hard, and it’s harder because people don’t know what to say – how to relate. But sometimes all anybody who’s fighting cancer needs, is to just know that they are loved and people are thinking of them. That was enough for him. He also told me that working on Hateful Eight was the greatest experience of his life, and that he’d love to work on more movies with us in the future. I told him I’d love that too, and to be strong – that I believe in miracles. But sadly, no miracle happened, and none of us ever saw him again.

After hearing of Matt’s passing, I thought a great deal about what he’d said. How working on Hateful Eight with us was the greatest experience of his life, and it didn’t entirely sink in until I saw the number of friends and family pouring their feelings and memories of Matt onto facebook. Only then did I realize what a compliment he had given me. This person whom I’d wished to know better was exactly who I knew him to be; a good man, a good brother. A good friend with a wealth of adventures and experiences beneath his belt, and I feel lucky to have been a part of this period of his life that was so special to him. We talked for hours while in Telluride, telling horror stories of life and comedy, and I wanted to know him better, to share more stories. We could have been friends forever, but such is life, and I’ll need to be thankful that all I got was a minute. Because he was a great person, who’s candle burned so bright, it could only last a short while. I am grateful and contented to have known him, if only for that moment.

It is my hope that Matt has gone forward to wherever he and his family’s beliefs have taken him. He deserves paradise for all the lives he brightened while here with us. As for me, I can only think of a few lines written by an old, dear friend of mine who also left this world too early;

“Shadows on the Earth
Cold spots on the Sun
somewhere, sometime
I’ve felt this love before
I hope we’ll meet
When the circle comes around again.”
-Rory Horton

Be at peace, brother. I hope we’ll meet, when the circle comes around again.

2 thoughts on “Standing on the Edge of a Feather – a tribute to Matt Hewlett.”